Although this type of ship is not so fast, it is widely used by independent traders and merchants mainly due to its good combination of cargo and passenger space. 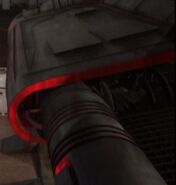