The Anla'Shok Na (literally "Ranger One" in Minbari) was one of the titles held by Valen when he formed the Anla'Shok. It was later passed down to subsequent leaders after Valen traveled beyond.[1] In 2259, at the behest of Chosen One Jenimer, the title was re-joined with that of Entil'Zha, last held by Valen himself.

During the First Shadow War, Valen founded the Anla'Shok as a way of uniting the Minbari military. He tasked them with being the guardians of life and the future. Unlike other militaries, the Anla'Shok would use a simple hierarchy starting from a single leader who answered only to the Grey Council and possessed the right to speak to them when he wished.[2] This leader was simply named "Anla'Shok Na", meaning "Ranger One".

After Valen's death, the title of Anla'Shok Na passed on to the senior-most member of the Anla'Shok, the one whom all the Rangers would respect and listen to. Generally, the successor was chosen by the current title holder. At times, the choice of Ranger One was made under emergency conditions, such as when Sech Turval stepped in after the death of Anla'Shok Na Lenonn during the Earth-Minbari War in 2246. Turval stepped aside after the arrival of Jeffrey Sinclair on Minbar. 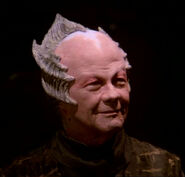