Babylon 5: Into the Fire (Game)

This article is about the cancelled PC Game. For the Babylon 5 episode, see: Into the Fire

Babylon 5: Into the Fire

Babylon 5: Into the Fire was an unreleased space simulator computer game developed in 1998 by Yosemite Entertainment for Sierra Entertainment.

"The Babylon 5 Space Combat Simulator begins on the third anniversary of the Interstellar Alliance — two years after the end of Season 5. Aside from one brief conflict with the Centauri Republic early in its first year, ISA President John Sheridan has delivered on his promise to keep the peace among its member worlds."

"But behind the scenes, away from the bright lights of news hover-cams, trouble is brewing. Races that have been at peace during the last two years are starting to fight over borders and the rights to new technologies. Random attacks on shipping lanes are growing in number. There are troubling reports of powerful, unidentified warships near the rim. It could be nothing at all—paranoia because things have been going along so well? Or it could be exactly what it looks like... trouble."

A number of original cast members from Babylon 5 reprised their roles alongside a number of new actors plus a number of veteran B5 character players such as Wayne Alexander, Ron Campbell and Kim Strauss signed on to play wholly new characters.[1] The footage for the FMV sequences were directed by B5 veteran director Janet Greek and shot in two phases; first a week long shoot on the standing B5 sets with a separate three day shoot against blue screen. Optic Nerve Studios also returned to provide the alien make-up effects. The 100 page long script was written by Randy Littlejohn and Christy Marx.[2]

"The game would have allowed players to go through all of the major wars of the B5 universe -- the Dilgar War, the Earth/Minbari War, the Shadow War and the Earth Civil War -- with a chance of affecting the outcomes and dealing with the temporal stresses caused by that."

Work on this game ended on September 21, 1999, when, as part of a corporate reorganization, Sierra cancelled it and laid off its development staff when the game was only a few months away from release.[5] This game was to have cast the player as the pilot of a Starfury fighter craft, giving the player an opportunity to "move up through the ranks," and eventually take command of capital ships and even fleets. Christopher Franke composed and recorded new music for the game, and live action footage was filmed with the primary actors from the series.[3] Some of Franke's music for the game was included on a separate disc that came with "The Official Guide to Babylon 5 (CD ROM)", also published by Sierra. 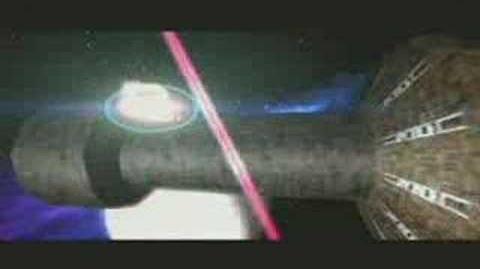