Edit
watch 01:32
She-Hulk Trailer Dropped - The Loop
Do you like this video?
Play Sound

The Bulwark Fleet is the space fleet of the Abbai Matriarchate.

As the Abbai are a defensive people, defensive formations are at the heart of both their fleet and army. Which rely heavily on fortifications and emplacements, of one type or another. In the Abbai fleet, heavy armor plating, redundant systems, and defensive weapon systems making up most of the Abbai's spaceborne assets. Reinforcing these assets are many layers of mines, orbital satellites, and both active and passive deterrents against hostile fleets entering Abbai space.

The fleet consists of several divisions of ships, each of which is assigned to a particular section of Abbai territory and tasked with delaying or repelling any invading force. Because the Abbai place great value on the lives of their people, orbital defenses are considered part of the Bulwark Fleet and automated assets are constantly expanded.

On their ships, they've used a combination of metals and composite materials, with which they achieved dense hulls and easily adjusted bulkhead structures. Parts of their vessels are kept flooded with oxygen-rich fluids, giving their crewmen an extra cushion against damage from the outside, in addition to accelerating the crew's movement and providing them with comfort. If a hull breach occurs, any exposed flooded corridors or compartments will vent a bit into the vacuum before freezing solid, thereby creating an instant hull seal.

The Abbai have created some of the best defended ships in the galaxy, in the process making some of the deadliest weapons in space. Abbai technology is superior to most of the other member races of the League and approaches that of the Centauri, and in some cases even that of the Minbari. It is the reason that the Dilgar were never successful in driving into Abbai space, for when the Abbai decide to close their area of space and guard it, it stays closed.

Since they don't strongly emphasize their military, the Abbai have a very simple ranking structure. It's the same one for both the space fleet and the ground forces. Abbai emphasize function over form, thereby making their military structure greatly streamlined.

The Police Fleet was designed as a patrol organization not a military force, which is technically staffed by civilians. It doesn't have a rank structure, as individuals are "hired" to perform specific jobs aboard the vessels. The one in charge of a ship is the "Annatar" (Ship-Mother), and the crewmen's titles are preceded by "Madam", even if it's male. Being a tolerant people, the Abbai often employee mercenaries from other races. They are employed in specific posts such as engineers or weapon operators, with the ship captains and senior staff nearly always being Abbai. Drazi are often employed as marines to defend the ships against enemy boarding actions. 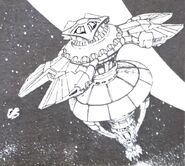 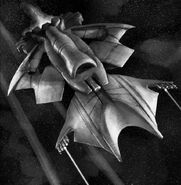