"In a world where every day is a struggle for survival, you need all the gods you can get."

The dominant Centauri belief system revolves around a Pantheon of fifty or so household Deities that they believe govern every aspect of their day-to-day lives. Some of their gods include former Emperors who have since been deified while some are less accepted than others.

A representation of Li 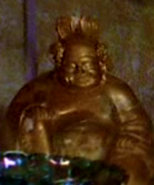