The Civility Naval Defence Force is the Pak'ma'ra space fleet of the Civility.

The Pak'ma'ra fleet is one of the first lines of protection for the Great Library and the wealth of the Quantium-40 mines in the Melat System. As the pak'ma'ra are not an expansionist race, it has allowed for a highly concentrated fleet to be based in their home system. The Council of Safety is in charge of all naval movements and resources, however trivial. They are also in charge of arranging for the construction of new ships for the fleet. The pak'ma'ra don't believe in field commendations without assuring that neither the ship, its crew, or their peers will be adversely affected by a change in that individual's rank. The act of raising the rank of any naval personnel or altering the status of that individual's position in the fleet, requires a decision by a ful Council of Safety.

The fleet is commanded by a list of previously written facts produced by various Councils. To adjust the way things work in the fleet requires Council meetings. When it comes to deciding what a unit or ship has to do at any given moment, it results in a great deal of debate and conversation within a Council of Safety. How to handle a given situation is usually managed per the previous findings of Councils of Safety but occasionally new situations emerge that require instant debate. Any pak'ma'ra military grouping answers in some fashion to a group of pak'ma'ra who at any moment can form a Council of Safety. To form a Council of Safety requires at least five members of that group, in addition to a Librarian. The group is called the Command Unit and within the group may be up to a dozen or more pak'ma'ra. It's the Command Units which debate and hand out the orders for military functions, and it may take several minutes to come to a decision. Which may become a problem if they are trying to decide the next course of action during actual fighting. 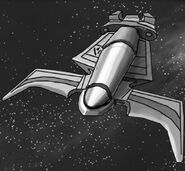 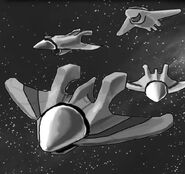