The Drakh War was a conflict between the Interstellar Alliance and the Drakh, homeworld-less former servants of the Shadows who followed in the footsteps of their former masters and sought revenge for their defeat and the destruction of Z'ha'dum. It manipulated many other species in their attempt to exact revenge.

As servants of the Shadows they were displaced when their masters lost the war. They sought revenge on those that caused the loss of their home and the exodus of the First Ones, and those that assisted them.

The first known interaction was between Delenn and a wing of White Stars. The Drakh, have been attacking and destroying ships of several races in their frontiers, leaving no survivors, sowing chaos.

Later, via Firell, lured the Minbari leader with a promise of an alliance that she could use to bolster the Religious Caste in their upcoming civil war against the Warrior Caste. After discovering the danger and the pursuant fight the White Stars were successful in defeating the Drakh carrier and her entourage.[1]

Next the Drakh recalled the assistance of Londo Mollari, Emperor Cartagia, and the Centauri people. They traveled to Centauri Prime and infected Regent Milo Virini with a Keeper so they could control him and manipulate Centauri politics.[2] They coerced the leader to create a secret space fleet from which the Drakh were able to launch attacks on the Interstellar Alliance.[3] The subterfuge caused great stress on the new Alliance and eventually caused its members to bring an all-out attack onto Centauri Prime. The devastation hurt the Centauri people to a point that would make them susceptible to rely heavily on the assistance of the Drakh.[4][5]

Months later the Drakh coerced Emperor Mollari to give a gift to President Sheridan and Delenn to be given to their child when it came of age, 16 years old. Hidden inside the gift was another Keeper.[6]

Interstellar Alliance president John Sheridan took command of the new starships Excalibur and Victory and based on visions provided by Galen took the ships on a course for Earth, believing an imminent threat was soon to befall the planet. His concerns were only deepened after he saw the destruction wreaked upon Daltron 7 and the Death Cloud that caused the destruction.

The ISA ships, led by President John Sheridan himself, defeated the Drakh at the Battle of Daltron VII though most of their force jumped into hyperspace and made their way to Earth. En route, Sheridan contacted Earth to warn them of the coming attack and to scramble as many ships as possible to defend against the coming enemy.

And so it Begins[]

The Drakh attack of Earth began the conflict when the Drakh released a deadly plague on Earth. The plague was estimated to take five years to kill all life on Earth.[7] The Victory was destroyed in the battle, sacrificing itself by ramming the Death Cloud's main control system segment.

Search for a Cure[]

Shortly after the plague was released Sheridan loaned the ship to the Earth Alliance to be converted into a traveling research center for a joint mission to find a cure for the Drakh plague somewhere in uncharted space. The mission was co-sponsored by Earthgov, Interplanetary Expeditions, the Earth Alliance Health Organization and the Interstellar Alliance with support from the Anla'shok.

By March 2267 the Excalibur crew were able to develop an anti-virus which could allow people to walk among those who are infected for up to 48 hours.[9] The Excalibur was eventually successful in stopping the Drakh plague and by 2271, it had been completely eradicated.[10][11]

After their decades-long presence on Centauri Prime was revealed, they left the world, with the Centauri and the Alliance in hot pursuit.[12] 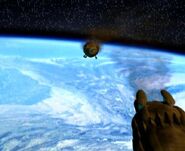