The EAS Agamemnon was an Earth Alliance Omega-class destroyer with the registry of OCG-5. It was named after the Greek mythic figure who commanded the Greek forces during the Trojan War.

The Agamemnon was one of the first Omega class starships to be built by Earthforce following the Earth-Minbari War.[3] 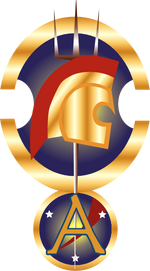 In December 2256, the Agamemnon stopped at Centauri Prime for a quick lay over, before embarking on a 3 year patrol of the outer sectors.[4] During this time, the Agamemnon patrolled and made diplomatic appearances in and around the League of Non-Aligned Worlds.[3]

In January 2259, the Agamemnon came to the aid of a supply vessel that had been attacked by hijackers. Shortly after departing, Captain John Sheridan was transferred to Babylon 5 to replace Jeffrey Sinclair as the station's commanding officer, leaving Commander James as the new Captain.[5][4][6][7]

In 2260, the Agamemnon was patrolling the solar system when Sheridan took the White Star to destroy the Shadow Vessel being studied by Earth Alliance forces. The Shadow vessel had been activated when a human was merged with the ship to act as a CPU, but it was done incorrectly, and the ship went insane. The Shadow vessel was lured into Jupiter's atmosphere where it was crushed by the pressure and gravity of Jupiter. The Agamemnon was sent to investigate, and found the White Star in the atmosphere. The crew of the Agamemnon did not realize that Sheridan was in command of the White Star. Agamemnon tried to force Sheridan to surrender, but he was able to escape through establishing a jump point at the edge of Jupiter's atmosphere. President Morgan Clark used this incident as an excuse to declare martial law. Clark's actions later provoked Sheridan and a number of others in Earthforce to go to war against Clark.[10] A crew member named Miller was injured during the confrontation.[7]

In 2261, the Agamemnon was under the command of Captain James. After Sheridan broke away from Earth at the start of the Earth Alliance Civil War, some of the crew suspected he was indeed guilty of treason, as Earth propaganda indicated. After hearing of attacks on civilian targets by President Clark's forces, however, they concluded that Sheridan was on the right side and chose to defect.

The Agamemnon chased Sheridan's forces for days until they caught up with him at an asteroid belt with the intent to join his forces, much to their former captain's delight. The majority of the Agamemnon was trained by Sheridan, including Captain James. The Agamemnon was upgraded, which included the updating of the DX-419 tracking system to help find Sheridan's Minbari fleet elements. Captain Sheridan remarked that the system didn't work too well.[7]

The Agamemnon subsequently fought in a fleet action near Beta IX. The Agamemnon picked up life pods from the EAS Damocles, including Duty Officer David Eisensen, who was shuttled over Eisensen to the White Star 2, where he explained that a Clark-loyal fleet of advanced destroyers was waiting to ambush them in Sector 300. Unwilling to risk the Agamemnon or the other Earthforce destroyers, Commander Susan Ivanova left them behind with Captain James in charge, while she took the White Star fleet to engage the enemy fleet directly. At the behest of a mortally wounded Ivanova, Sheridan commanded the fleet with the Agamemnon as his flagship during the final advance towards Earth.[11]

After successfully sabotaging and disabling General Robert Lefcourt's Clark-loyal fleet at Mars, Sheridan's forces, now supported by ships from the League of Non-Aligned Worlds, pressed on to Earth. Then during the Liberation of Earth, Agamemnon engaged the automated Planetary defense grid under Clark's direct control. After Clark turned the defense grid towards Earth, the Agamemnon took severe damage from missile strikes while engaging the defense platforms at close range. The ship's forward guns were disabled just as the last remaining platform was preparing to target North America's eastern seaboard with its particle weapon. Sheridan ordered the crippled Agamemnon to ram the platform to prevent it from firing. However, the EAS Apollo arrived from Mars in time to destroy the platform and prevent the destruction of the Agamemnon.[12]

Bridge of the Agamemnon