The EAS Alexander was an Earth Alliance Omega class destroyer which was under the command of General William Hague at the start of the Earth Alliance Civil War. 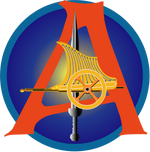 Hague was killed returning from a meeting with authorities on Orion VII when the Alexander came under attack by the EAS Clarkstown. Major Ed Ryan took command, reluctantly destroying the Clarkstown in order to get away. The ship proceeded immediately to Babylon 5, a place Hague believed they would be safe. Once at Babylon 5, he asked for sanctuary, which John Sheridan was willing to give.

The EAS Churchill arrived at the station as well. The captain of that vessel, Sandra Hiroshi, informed both Sheridan and Ryan that Clark had ordered the bombing of Mars for refusal to implement martial law. She warned them that Clark was sending ships to seize Babylon 5 and the Alexander. Major Ryan offered to take the ship and draw their fire, but Sheridan convinced him to stand with them as one.

Forces loyal to Clark arrived at the station and a battle soon ensued. The Alexander was heavily damaged, but the Churchill and the Clark-loyal vessels were destroyed. After the battle, Alexander Major Ryan decided to leave Babylon 5 space to draw away at least some of Clark's forces and to search for other rogue ships that had defected to their side.[2]

After the liberation of Proxima III in 2261, the Alexander returned to Earth Alliance space and was one of rebel destroyers that volunteered to remain to protect the population from counterattacks.[4]

Retrieved from "https://babylon5.fandom.com/wiki/EAS_Alexander?oldid=52038"
Community content is available under CC-BY-SA unless otherwise noted.