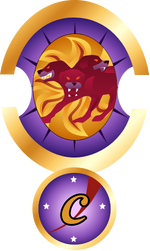 While operating in the Lanep System, the engines of the Cerberus were damaged in an attack by an unidentified alien vessel. Captain Ross initiated repairs, but when the alien vessel reappeared, he abruptly ordered the ship to move off. Despite Ross' quick reaction, the Cerberus was easily destroyed. The only crew member to survive was Ensign Matthew Gideon, who was outside surveying the damaged engines. Gideon was left stranded in space and watched helplessly as the alien escaped into hyperspace.

Gideon was eventually rescued by a technomage and dropped off at Omega VII, and soon afterward reported his eyewitness account of the attack on the Cerberus. In spite of his testimony, the official report showed that the destruction of the Cerberus was caused by a malfunction in its jump engines.[3]

The Shadow Hybrid closing in