The EAS Cortez was an Earthforce Explorer class ship. 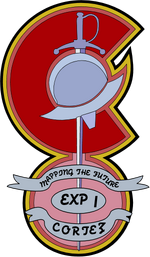 She was assigned to deep space mapping around the year 2254 under the command of Captain Jack Maynard. They spent five years exploring and mapping unknown space, the last two in Sector 900 alone.

In 2259, the Cortez was called in to repair one of the Euphrates Sector jump gates. Since Babylon 5 is located in that area, the ship's captain decided to travel to that station for its re-supply and catch up with his old friend, John Sheridan.

After re-supplying, the Cortez jumped back into hyperspace, but a catastrophic malfunction sends the ship adrift. While they have the parts to repair their navigation, the time required would put them so far off the Hyperspace beacons they would be lost forever. Luckily, they were able to send a distress signal to Babylon 5, and a Starfury wing manages to bring the ship back to Babylon 5, marking the first time an Earth ship lost in hyperspace was recovered.

The Cortez was whilst leaving the area for the "new rim" that a reactor spike caused a the Cortez to drift unpowered in Hyperspace. The ship was later recovered by the Babylon 5 Starfury squad, Zeta Squadron. [1]

Retrieved from "https://babylon5.fandom.com/wiki/EAS_Cortez?oldid=44532"
Community content is available under CC-BY-SA unless otherwise noted.