The EAS Heracles was an Earthforce Omega-class destroyer under the command of Captain Trevor Hall.

In 2261, the Heracles led the illegal blockade of Proxima III ordered by President Morgan Clark. As part of this blockade, she took part in attacks on civilian targets.

As the lead ship in the blockade, the Heracles and her Captain took the role of Fleet Command (flagship) for the battle. After the third wave of White Stars jumped into the Proxima system, she and the EAS Juno continued towards the primary target of the second wave. The Heracles then fired the opening shots of the battle.

As the battle ended, the Juno had withdrawn, the EAS Nemesis had surrendered, the EAS Furies and EAS Vesta had declared themselves non-combatant, and the EAS Pollux had been destroyed. This left the Heracles as the only Earthforce vessel still in combat. She was for all intents and purposes disabled, without weapons or defenses. Captain Sheridan ordered her to return control of Proxima III to its lawful government, recall all fighters, and surrender. Captain Hall refused to comply, knowing that he would stand trial for his actions in the blockade. His second in command, Commander Sandra Levitt, relieved him of command rather than have the entire crew lose their lives due to his refusal to give up. She then surrendered.

Following the battle, Commander Levitt took the Heracles to Beta 9 for repairs, planning to withdraw her from the field until the end of the civil war.[3]

The Heracles was later retaken by Clark's forces and assigned as part of the fleet stationed at Mars. During the Battle of Mars, it was not affected by the Shadow-altered telepaths brought on board by the Mars Resistance, but the vessel was nevertheless disabled by White Star class vessels.[4][5] 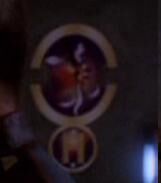 Symbol of the EAS Heracles

The Heracles at Mars