The EAS Lexington was a Hyperion-class heavy cruiser. It is notable for being the ship used to destroy the Black Star after its executive officer, John Sheridan, assumed command. 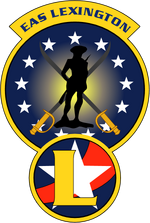 In 2245, at the onset of the Earth-Minbari War, the Lexington was under the command of Captain Roger Sterns, with Commander John Sheridan as his first officer. The Lexington was considered an old patrol ship. His captain didn't expect to fight in any battle before its decommission.

In 2247, in the aftermath of the initial Minbari advance, the Lexington was at Earth undergoing a refit. The Lexington led a small task force on a patrol, battle group ''Independence'', to investigate at the Dakota system the rumors of a Minbari ''ace cruiser'' attacking and taking out EA patrols on it. . The Lexington was ambushed by Minbari warships and Captain Sterns was killed. With the Lexington crippled from the ambush, Sheridan used nuclear warheads to mine an asteroid field and succeeded in destroying a Minbari flagship, the Black Star.[1][2][3]

Though the Lexington survived the encounter, it suffered extensive damage and would spend some time being repaired.

Anyway, the damage must have been intensive, as it was said than the cruiser was scrapped for salvage after the war.