The EAS Prometheus was an Earthforce Hyperion-class heavy cruiser in service as of the Earth year 2245. Prometheus is noted to be the leadship of the task force that made first contact with the Minbari. Subsequently, Prometheus is also noted for being the ship that fired first shots in the conflict ultimately known as the Earth-Minbari War.[1][2] 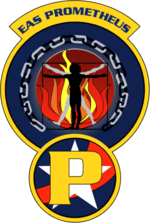 In 2245, the ship was commanded by Captain Michael Jankowski, with Commander Alan Chafin serving as first officer. Chafin was Jankowski's second choice for the post after his previous XO transferred to the EAS Churchill and Jankowski's first choice (Commander John Sheridan) turned him down.[3]

When the Prometheus encountered the Minbari, they approached with the gunports open, which according to Warrior Caste custom is a sign of good faith and respect to the Humans. Jankowski, not knowing of this tradition, took the gesture as a sign of hostility and opened fire. The attack killed Dukhat, the leader of the Grey Council, and started the Earth-Minbari War.[3] [4]

David McIntyre was the Gunnery Sergeant on the Prometheus and as such was the person who actually fired on the Minbari ships, as ordered by Captain Jankowski. Despite the tribunal absolving McIntyre of any responsibility for following orders, he continued to struggle with the guilt over what he had helped start. [1]

Retrieved from "https://babylon5.fandom.com/wiki/EAS_Prometheus?oldid=60632"
Community content is available under CC-BY-SA unless otherwise noted.