Earthforce's rank and insignia draws from a number of predecessor militaries in several member states from across the Earth Alliance, without being directly based on any single one in particular. They in fact combine the structures from traditionally separate services - army, navy, and air force - into a single cohesive command structure.[1]

The Earthforce uniforms are color coded according to branch: blue for fleet, grey for security, and brown for marines. Officers are allowed to transfer between those divisions; Richard Franklin was a general in the Earthforce Marine Corps at the time of Operation Sudden Death, but earlier in his career he was the first officer on board the EAS Ares.[2]

The rank insignia is usually displayed on the shoulder epaulets, with the exception of non-comm EF Marine Corps BDUs on which the rank insignia is displayed on the upper sleeve. Stat bars are worn by Earthforce officers and enlisted on the left breast, directly underneath the stylised Earth Alliance Badge and denote the wearer's branch of the service. Flag officers wear an irregular star over their stat bar; also, while most Generals are by definition in command positions, not all of them wear the gold command bar.[3]

The division badge is worn on the upper left shoulder and denotes the wearer's speciality. The exception being the Marine Command patch which is worn on both shoulders of an officer in Marine BDUs.[4][5] Pilots wear their division patch on the right breast, as the left shoulder is reserved for their squadron patch. The flight wings patch is worn on the upper right shoulder of the standard duty uniform, or incorporated into the upper left breast name patch on the flight suit. The patch itself denotes that an officer is a qualified pilot and the extent of their qualification.

Prior to Babylon 5 entering full production, a very different set of EF rank insignia and significantly different uniform was used in the feature length pilot, "The Gathering". Rather than being an alternate set that fell out of use and superseded by the more familiar insignias used throughout the series, later productions that included flashbacks to events prior to 2257 showing second set of insignias and uniforms in use as early as the Earth-Minbari War, effectively retconned the originals out of continuity.

What appears to be at least one iteration of an original defunct scheme was described in the Babylon 5 Security Manual, though the descriptions do not exactly match what was seen in "The Gathering", further confusing matters.[9] Curiously, it lists two separate insignias for Captains in what an appears to be a delineation between fleet and marine ranks, while few insignias (JCoS, Colonel & Major) appear to have been retained in the "new" scheme: 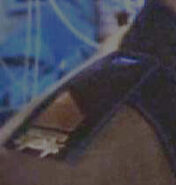 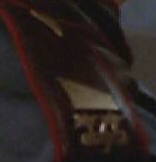