An encounter suit is, by definition, used by alien species so that they are capable of interacting in environments that they would otherwise be unable to function in.

The main function of an encounter suit is similar to that of a breather, but for use over the entire body as opposed to just the respiratory organs. This may be for several reasons. The being may not be able to create a sufficient seal over their respiratory organs, they may have multiple points of respiration across their bodies, or their bodies themselves may be biochemically vulnerable to alien atmospheres.

Among the few races known to use encounter suits in oxygen-nitrogen atmospheres are the Vorlons and the Gaim. While the Gaim appear to genuinely require their suits, the Vorlons have been seen multiple times outside of their suits, even in the vacuum of space.

Kosh saved John Sheridan from falling after he was forced to jump out of a transport. Kosh safely landed Sheridan on the ground, while projecting his own appearance as an angelic being of light to the onlookers nearby. Each race saw him as a religious figure of their own race and religion-- G'Kar saw G'Lan, Lennier and Delenn saw Valeria, the Drazi ambassador saw Droshalla, and Sheridan saw a traditional depiction of a Judeo-Christian angel. After this, Kosh retreated to his quarters, explaining later that being seen by so many had drained his energy.[1] The Vorlons have been seen outside of their suits on enough occasions to raise doubt as to whether or not they even require their suits. As such, the exotic mix of gases that the Vorlons stipulate to be used in their quarters may have only been an intentional misdirection on their part to hide their true nature, or they may simply be most comfortable in their native environment.

Species that use these suitsEdit 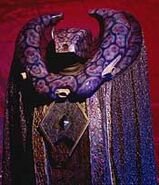 A Human Anla'Shok Encounter Suit.
Add a photo to this gallery

Retrieved from "https://babylon5.fandom.com/wiki/Encounter_suit?oldid=57581"
Community content is available under CC-BY-SA unless otherwise noted.