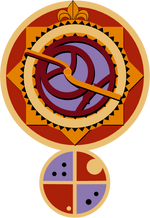 These ships are built by Mitchell-Hyundyne at the New Kobe Orbital Shipyard. Designed for the long haul, this is a pure breed exploration vessel for charting out on the Rim, making first contact with new species and constructing new jumpgates to open up exploitation of areas with useful resources. Vessels of this class were not built for combat and were unlikely to be called upon for fleet action support.[1]

Explorers are the largest ships in service of the Earth Alliance, at over six kilometers in length (for comparison, the Babylon 5 space station is just over eight kilometers long[2]). Like many contemporary Earthforce vessels, Explorers were designed with a large rotational section for simulated gravity, and a forward-facing launch bay. In addition to their complement of fighters, Explorer-class ships have an array of smaller support vessels and shuttles for short range exploration and planetary surveying. The bulk of the ship's length is taken up by equipment mounting spars – forward and aft of the rotating habitation section – used to carry jumpgate construction equipment and pre-fabricated parts.

The Earth Alliance has very few of these ships due to their large cost in credits and equipment, but the few they do have allow for rapid expansion of Earth's sphere of influence through jumpgate construction and are a good source of income, as other races can then be charged for the use of new jumpgates.

Captain John Sheridan remarked that if an Earthforce officer was "supremely lucky," he or she would see two Explorer class ships in his or her lifetime – in order to justify their expense, they are always on the Rim constructing gates. They are only seen in civilized space if they are undergoing major overhauls, and in fact crew starting or finishing their tours are transported to or from the Explorer by other ships instead of the Explorer visiting a port of call to pick them up.[3]

By 2266, the standard Earthforce uniforms worn by Explorer crews in 2259 had been replaced by distinctly different black uniforms with loose collars and removable sleeves. Their hand links were also replaced with wrist links,[4] while the rest of Earthforce continued to use hand links until at least 2281.