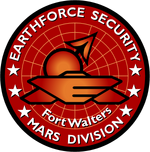 Fort Walters was an Earthforce ground base located in Solis Planum on Mars.

In October 2261 renegade Captain John Sheridan was held and interrogated at the Fort Walters staging area for almost a week after being captured on the Mars Colony. He was eventually broken out and rescued by a team consisting of Michael Garibaldi, Doctor Stephen Franklin and Lyta Alexander who gained access to the base through the subterranean service tunnels that the resistance had managed to crack. At least five of Fort Walters' security personnel were killed during the escape.[1]

Retrieved from "https://babylon5.fandom.com/wiki/Fort_Walters?oldid=50280"
Community content is available under CC-BY-SA unless otherwise noted.