G'Quan class heavy cruisers were the backbone of the Narn Regime's naval forces up until their defeat by the Centauri Republic in 2259. Ma'Kan Industries located at Wings of G'Lan facility over Narn is responsible for manufacturing this class of vessel.

The G'Quan-class cruiser was active at least since 2245. The majority of them were destroyed during the Narn-Centauri War, with the greatest losses suffered at the Battle of Gorash VII.

In an attempt to destroy the main Centauri supply base, Warleader G'Sten led an armada made up of the bulk of the Narn fleet in an all-out frontal assault on a planet called Gorash VII. Unfortunately, the planet was guarded by a small fleet of Shadow vessels which intercepted the Narn armada, completely annihilated it, and took only slight damage to one of its vessels.[3]

Despite this, about ten Narn warships, mainly cruisers, did manage to survive the war though most were crippled and left to drift during the Centauri's rush to advance on the Narn Homeworld; they were later salvaged by the Narn Resistance, often requiring one ship to be cannibalised to repair another. Only the G'Tok was left fully functional thanks to the intervention of Babylon 5 forces, and it would later play a key role in the war against the Shadows.[4][5]

Following the liberation of Narn from Centauri rule in 2261, the Narns quickly began to rebuild their fleet, and within a few years many new G'Quan-class cruisers had been placed into service.[6]

Babylon 5 the Roleplaying Game's Ships of the Galaxy

In The Official Guide to Babylon 5 released by Sierra Entertainment, the ship's name was misspelled G'Quon.

Profile of a cruiser.

The bridge of the cruiser. One of the many variations. 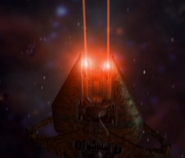 "I wanted it to look simple from afar, almost as if you were looking at a fighter, but as you got closer you got the feeling that the ship was immense."

The G'Quan class was designed by Computer Imaging Supervisor and Foundation Imaging Co-founder Paul Bryant. The design was intended to echo the shape of the Narn fighter that had already been developed by Ron Thornton while the striped hull markings were meant to reflect tribal art and war paint.[14] The G'Quan first appeared in the episode "Revelations" as a replacement for the more rushed design of Narn cruiser used in the first season and would continue to be used as the primary Narn ship all the way through the rest of B5, into Crusade and a rebuilt version even appeared in the "The Lost Tales" DVD movie.