"The Queens be with you."

The Gaim are a methane-breathing insectoid race.[1]

As methane breathers, Gaim Explorer Drones (those Gaim most commonly seen off their homeworld) must wear specialized encounter suits in order to survive in a non-native atmosphere.

At the apex of Gaim social order is the queen. Since a given Gaim is obedient to its queen on a genetic level, rebellion and disobedience are physical impossibilities unless induced chemically. Lower level Gaim can be influenced to alter their allegiance from one queen to another when exposed to certain airborne chemicals. As such, pheromone warfare is a standard component of Gaim cold war tactics. Each Gaim within their society is genetically designed for a specific task oriented purpose, and even the queens themselves are designed by their progenitors. Individuals in Gaim society range from very intelligent, completely autonomous multi-talented advisors to the queen to non-intelligent, bio-mechanical worker drones. Since the function of Gaim workers and drones does not change, there is no possibility for any kind of social advancement in Gaim society. Rewards for a task well done are given in the form of chemical enhancements since Gaim are designed to feel pleasure when a task is done well, while a failure triggers fear. 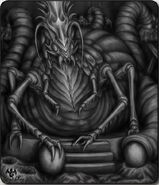 One of the Gaim Queens. 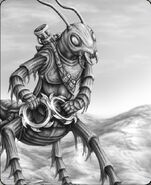 A member of the Gaim species.

Hive Wars of the Pre-Spacefaring Gaim.