Jonathan Chapman is an actor and one of the more prolific background actors of the series. Along with Bill Blair and Kim Strauss he has done more alien make-up acting than most of Hollywood.

He is most noted for playing the Brakiri Ambassador but performed a variety of other smaller parts.

As a Minbari he played a B5 resident that responded to Londo Mollari during the commotion immediately after Earth declared martial law.[1]

He also filled in as an acolyte that attempted to refuse Delenn admission into the Grey Council chamber.[2] 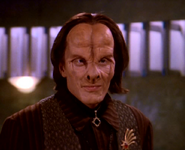 Jonathan Chapman as "Kullenbrak"
Add a photo to this gallery

Retrieved from "https://babylon5.fandom.com/wiki/Jonathan_Chapman?oldid=64736"
Community content is available under CC-BY-SA unless otherwise noted.