The Markab Transport was a type of vessel employed by the Markab Confederacy until its extinction in 2260.[1] Following the Markab extinction, other races appear to have claimed many of their derelict ships and continue to use them as their own transports. 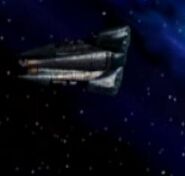 The Markab transport Kar'ti adrift
Add a photo to this gallery

Retrieved from "https://babylon5.fandom.com/wiki/Markab_Transport?oldid=64105"
Community content is available under CC-BY-SA unless otherwise noted.