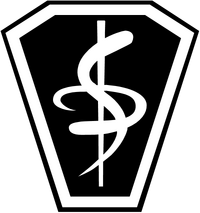 Medlab is a facility or group of facilities aboard space stations and starships specifically adapted for treating patient from numerous different species and often include isolabs.

The various Medlabs on Babylon 5 were state-of-the-art facilities located in Red, Green and Blue Sectors and employed several hundred doctors, nurses and med-techs versed in all forms off xeno-biology. Each Medlab was equipped with both standard and Isolab facilities, are open 24 hours and can be contacted though the Babcom system.

Located in Blue 2, Medlab One was the Station's primary medical facility and often under the direct supervision of the Medical Chief of Staff. In 2258 a Soul Hunter was treated in this facility.[1] In late 2259 Lyta Alexander was admitted to Medlab 1 after arriving unconscious, aboard a damaged ship from Mars. [2] In January 2260 Medlab 1 was moved to a new and better design facility. Shortly afterwards, Marcus Cole was admitted after arriving unconscious, aboard a damaged Drazi ship from Zagros VII. [3] Later that year the Telepaths found in cryonic suspension were taken to Medlab 1. Carolyn Sanderson was briefly taken out of suspension but her Shadow modifications cause massive disruption to the Medlab systems, so she was sedated and put back in suspended animation. [4] In 2262 Londo Mollari was admitted to Medlab 1 following a heart attack. [5] Not long after, a Ranger was admitted with terminal injuries after his White Star was crippled on its way back from the Enphili homeworld. [6] Later that year several Rogue Telepaths took hostages in Medlab 1, including Dr. Franklin and Michael Garibaldi. The situation was later defused by the arrival of Byron Gordon. [7][8] Not long afterwards a dead body was admitted to Medlab 1. An examination determined the death was caused by massive cerebral trauma, later found to be caused by Jonathan Harris. [9]

The Isolab was a pressurised compartment in Medlab used to diagnose and treat non-oxygen breathing patients. The room was hermetically sealed with a self-contained air supply that could be tuned to the needs of the patient's species. There was an airlock to allow passage.[10]

The infirmary was a medical care facility located adjacent to Medlab One.[11][10][12] In 2260 the infirmary was used to billet Earthforce Marines visiting the station as part of Operation Sudden Death.[13]

In 2258 Nelson Drake spent time in Medlab 2 after recovering from his ordeal with the Ikarran War Machine.[14] A little over a month later Kiron Maray is admitted to Medlab 2 intensive care after falling into a coma following an assault by Homeguard. Fortunately he recovered quickly.[15] In 2259 Medlab 2 admitted three deceased Markabs for processing prior to them being shipped back home. Doctor Stephen Franklin ordered them transferred up to Medlab 1, shortly before the discovery of the outbreak of the Drafa Plague. Shortly afterwards, Medlab 2 was responsible for detecting the plague in a deceased pak'ma'ra. Doctors Mitch, Tasabe and Simms were assigned to perform a full autopsy.[16] In 2260 Medlab 2 took on multiple trauma cases following the Battle of Sector 83, necessitating as many non-critical patients as possible to be temporarily moved out to other quarters, the Rotunda and the Sanctuary.[17] In 2262, Medlabs 2 & 3 were cleared out in anticipation of significant casualties when an unknown alien expeditionary force was expected to attack the station.[18] Later that year, after the onset of the Centauri War of Aggression, several Centauri were attacked and murdered on the station. Some of the surviving victims were treated in Medlab 2.[19]

In 2260 Dr. Steinhoff was sent to assist Dr. Lieberman with a Brakiri patient in Medlab 3, since Steinhoff had the most experience with Brakiri biology.[20] In 2261 Dr. Franklin pulled several Doctors off standby from Medlabs 3 & 4 to assist with the transfer of the Telepaths in cryonic freeze to another bank due to some mechanical problems with the freezers in Medlab 1.[21] In 2262, Medlabs 2 and 3 were cleared out in anticipation of significant casualties when an unknown alien expeditionary force was expected to attack the station.[18] In late 2262 Dr. Maya Hernandez was assigned to Medlab 3.[22]

In 2261 Dr. Franklin pulled several Doctors off standby from Medlabs 3 and 4 to assist with the transfer of the Telepaths in cryonic freeze to another bank due to some mechanical problems with the freezers in Medlab 1. [21] Later that year, Medlab 4 admitted a patient who was the victim of a mugging. As he didn't remember much about the incident, Lyta Alexander was commissioned at his request to help him remember so he could identify the perpetrator. [23] In 2262 Medlab 4 suffered a power loss shortly after an attack from an unknown alien force was beaten back. [18]

In 2260 Medlab 5 was under the supervision of Dr. Harrison. During a medical staff meeting she reported that they had lost a Centauri patient due to chronic problems with bicardial separation. Also, the night before they received a male Human DOA which it would later be discovered was the result of a failed joining with a Vindrizi. [20] In Late 2260 Medlab 5 took on multiple trauma cases following the Battle of Sector 83, necessitating as many non-critical patients as possible to be temporarily moved out to other quarters, the Rotunda and the Sanctuary.[17] In late 2262 Dr. Fuhara was assigned to Medlab 5. [22]