Michael McKenzie is an actor who played a variety of characters on Babylon 5 including roles as three Narns, three Drazi, three Minbari, and a Grome. 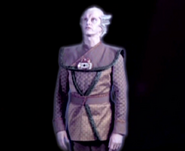 Michael McKenzie as "Minbari Captain"
Add a photo to this gallery

Retrieved from "https://babylon5.fandom.com/wiki/Michael_McKenzie?oldid=65062"
Community content is available under CC-BY-SA unless otherwise noted.