The Narn-Centauri War was a conflict between the Narn Regime and Centauri Republic which occurred in 2259 and culminated in the conquest of the Narn Homeworld.

On December 30, 2258, unknown to the Centauri Emperor Turhan, Londo Mollari arranged for a small fleet to destroy a Narn military base in Quadrant 37, killing ten thousand Narn warriors. The Narn were unable to discover who had destroyed the base.[1]

G'Kar, the Narn ambassador to Babylon 5, suspected an ancient and unknown alien race was behind the attack. After a couple of weeks of investigating formerly dead worlds on the Galactic Rim, he managed to convince the Narn government to dispatch a warship to Z'ha'dum. However, the Shadows become aware of this and destroyed the ship as soon as it exited hyperspace. The Narn Regime believed it was destroyed in an accident.[2]

When Centauri Emperor Turhan suffered a heart attack during a visit to Babylon 5 in June 2259, factions within the Centauri began to maneuver to take control of the Empire as soon as he expired. One such faction included Londo Mollari, who requested from Mr. Morden an attack on a large Narn colony at Quadrant 14, at the very border of Centauri space. This resulted in a second Shadow fleet descending upon the colony, destroying its defenses in a matter of minutes. This time, a fleet of Centauri warships arrived after the Shadows to occupy and secure the planet. They were quickly discovered and attacked by a squadron of Narn fighters, but the Centauri wiped them out without a single casualty. Turhan died shortly afterwards, and his nephew Cartagia became the new emperor. Earthforce Captain John Sheridan, having been tipped off that the Centauri had outside support for the attack (and that they would not want that knowledge getting out), managed to compel the transfer of the surviving Narn citizens from the colony back to Narn. Believing the Centauri had launched the assault completely, the Narn Regime officially declared war on June 17th against the Centauri Republic.[3][4]

Over the next few months, the Narn steadily lost their defensive war with the Centauri, who took full advantage of their secret alliance with the Shadows. While the Narn fleet had looked impressive before the war, it had mainly been used in attacks on poorly defended Centauri targets. Additionally, when it came to an all-out open war, the Narn found that the Centauri fleet was still larger than their own, and that Centauri warships still possessed a significant technological advantage over their Narn counterparts. Also, the destruction of an important base in Quadrant 37 and the colony in Quadrant 14 along with the losses of the defending battle groups and other ships prior to the war left their resources stretched. Even so, the Narns' experiences with the Centauri allowed them to compensate for some of these problems, and in several battles (such as the one near Babylon 5), the Narn heavy cruisers were able to destroy or at least heavily damage their Centauri opponents before being destroyed themselves.

The Narn Regime also found itself without significant allies in the War. Due to their almost constant aggression in the year prior to the war, many of the other races were unsympathetic to their struggle. This even extended to when the Centauri were accused to be firing on civilian targets. Despite a promise not to attack civilian targets, the Centauri launch a sneak attack on a Narn civilian colony, causing the deaths of 5,000 Narns and forcing the evacuations of several thousand others. The Centauri officially respond to the accusation they are targeting civilians by accusing the Narns of placing military targets in the midst of civilian colonies to use their own people as shields.

Captain Sheridan attempts to persuade the Earth Alliance to support the Narn, but his appeal is rebuffed. Similarly, while Ambassador Delenn is troubled by the civilian deaths, she insists both that it is difficult to trust the Narn's word that they want only humanitarian aid when the Narns have longed pledged to wipe out the Centauri completely. Sheridan and Delenn do manage to pool their resources and provide some minor support behind the scenes via transporting food and medical supplies. They also manage to smuggle Narn civilians out of harm's way.[5]

In September 2259, Babylon 5 itself becomes a battleground. Narn and Centauri merchant ships fire on one another and have to be subdued by the station's Starfuries. In an interview with an Earth Alliance ISN reporter, G'Kar charges the Centauri with violating the neutrality of Babylon 5 by using it as a point of smuggling illegal weapons (a charge which the Centauri deny). When asked to confirm that the Narn have lost six of the past seven battles, G'Kar dismisses it as "Centauri propaganda."[6]

When Sheridan tells Ambassador Mollari that he has ordered all Centauri merchant vessels to be searched for illegal weapons, Mollari tells him that this "violation" of the Centauri's sovereign rights will not be tolerated. Shortly afterwards Centauri Primus-Class battlecruiser exits hyperspace directly above Babylon 5 and targets its weapons on the station. Mollari announces that the battlecruiser will blockade Babylon 5 unless Sheridan revokes his order to search Centauri ships. Sheridan, believing the Centauri are bluffing, sends a single merchant ship past the Centauri cruiser. The cruiser indeed does not fire, but allows the merchant vessel to leave unharmed. However, a Narn G'Quan Class Heavy Cruiser suddenly exits hyperspace and attacks the Centauri cruiser. A fierce battle erupts between the two ships. The Narn cruiser destroys the Centauri cruiser, but is heavily damaged in the process. When it tries to flee, its jump engines explode and the Narn cruiser is also destroyed.[6]

What really doomed the Narn to defeat was the secret assistance the Centauri received from their Shadow allies. The Narn fleet was no match at all against the ancient Shadow vessels; a single Shadow vessel could easily destroy an entire fleet of Narn warships. 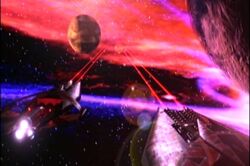 In December 2259, the Centauri conquered three key Narn colonies at Zee, Dross, and Zok. The desperate Narn Strategic Command decided to launch an all-out strike against the main Centauri supply base at a planet called Gorash 7. The Narn hoped that, by uniting most of their remaining warships into a single armada, they could destroy the Centauri supply base and force the Centauri to temporarily halt their advance. This would give the Narn time to regroup and rebuild their forces. The danger of this plan was that, in order to create a fleet large enough to make the assault, the defenses of the Narn homeworld were severely depleted, thereby leaving it open to attack if the Centauri discovered the Narn's plan. However, the Centauri did indeed learn about the Narn strategy by intercepting and breaking their coded transmissions, and planned a decisive counter-attack to end the war with a massive assault on the Narn homeworld itself, assuming the Narn Main Fleet could be neutralized beforehand. 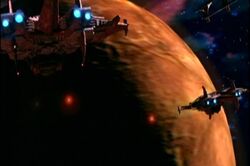 Ambassador Mollari relayed the information to the Shadows, and so five Shadow vessels were waiting for the Narn fleet at Gorash 7. Although the Narn fought heroically at the Battle of Gorash VII and managed to damage at least one Shadow vessel, the outcome was never in doubt.  The entire Narn armada was completely destroyed. Meanwhile, the Centauri fleet launched its full scale assault on Narn. Quickly overcoming the now meager defenses, the fleet began to bombard Narn from space using mass drivers illegally fitted to their battleships. The mass drivers rained huge meteors down onto the planet's surface, reducing most of Narn's cities to rubble, killing millions of Narn civilians, and shattering the Narn's infrastructure, communication, and most other basic services. The bombing continues for four days, drawing denouncement from every other major power (even the Vorlon Empire).[7]

As an act of simple survival, the Narn Regime agreed to an unconditional surrender to the Centauri on December 10th[8], who then re-occupied the Narn homeworld with military forces and enslaved the Narn people once again. Ambassador Mollari returns to Babylon 5 to announce the terms of the surrender:

The only member of the Kha'Ri to escape was G'Kar, the Narn Ambassador to Babylon 5. Although ordered to surrender to the Centauri by Ambassador Londo, G'Kar had asked Babylon 5 commander John Sheridan for sanctuary on the station, and Sheridan agreed. In his last act as Ambassador, G'Kar boldly declared that "though it take 1,000 years...we will be free!"[7]

The younger Narn blamed their defeat on the fact that their leaders had used Centauri strategies. The older Narn, who remembered the first Centauri occupation and enslavement of their world, believed that they were defeated because they had not been more like the Centauri. As a result of the Centauri bombardment, the Narn homeworld underwent major climate change, as dust blown into the atmosphere reduced the planet's sunlight, lowered the global temperature, and created near-constant windy conditions around the planet.

Retrieved from "https://babylon5.fandom.com/wiki/Narn-Centauri_War?oldid=61527"
Community content is available under CC-BY-SA unless otherwise noted.