The Babylon Project
Register
Don't have an account?
Sign In
Advertisement
in: Narn Regime, Organizations, Non-Canon Articles,
and 3 more

The Narn Armed Forces are the military assets of the Narn Regime. Which rank among the most powerful military forces in the galaxy, outside of the First Ones.

In the Narn Regime, the military is one entity, there is no division of the fleet and ground forces unlike with other races. Soldiers are assigned roles that they are best qualified for after basic training, where they will remain until they are reassigned for other duty. Though their military appears to be delineated along classical lines like those of other militaries, in reality their battlefield organization and system is one in which they use the same basic layout for every purpose that requires the deployment of a military force.

This is partly due to the Narn preference for using a single tool to handle most issues rather than designing a special tool that is optimized for that task, and partly due to the limited amount of experience that the Narn had in warfare before their trial of fire at the hands of the Centauri. Narn prefer to work harder (e.g. using more force than is necessary), than having unnecessary levels of complication (in their eyes). Which is evident in the small number of ranks within their military and their units' modular orientation. This has resulted in an organizational flexibility superior to the other races, with the Narn being able to muster military manpower faster during an emergency and rally troops to handle a situation quicker than a force that needs to bring in specialists.

In the Narn military, the bulk exists in the Assault Force, which is a unified core of ground, aerospace, and space troops which operates via the same chain of command after a certain point. There is a small amount of specialized logistical support for each type but unless battlefield conditions require it, the troops are not kept separately. The Narn organizational chart is very basic, often being altered in the field or even ignored during battle situations. Despite this, the Narn do attempt to adhere the chain of command if possible. Unlike with many other races, a Narn's education level or social structure has no bearing on what that individual Narn will be doing in the military, his duties and responsibilities will be based on what he can prove to others he can handle.

The ships of the fleet are large, bulky, and brimming with weaponry. Narn warships are not subtle and neither are their weaponry, both are straightforward in both design and function. Battleships usually have their best weapons to the fore, thereby focusing massive amounts of firepower on a single target until it's annihilated. Faster ships are full of zealous soldiers whom are ready to board enemy ships and slaughter them all, with their bare hands if necessary. Every third crewman on a Narn ship is likely also a boarding marine, which makes the process of boarding and capturing a Narn vessel an arduous task.

When it comes to war, the Narn have three objectives which are defend, harass, and attack. Therefore they don't use fleet formations that have a purpose beyond those three. The Fleet is the primary formation used with the military's space contingent.

Standard practice is the maintenance of four fleets at combat readiness, but there have been up to six fleets at a time. These fleets basically have the same configuration and are scattered across the Regime. Unlike other races which have a sharp dividing line between major assets, among the Narn its not uncommon for two or more fleets to be operating in the same quadrant or star system.

In the Narn Armed Forces, there is more specialization in the ground forces than in the space fleet. Narn who spend a lot of time fighting as ground infantry soldiers usually end up specializing in it for the remainder of their lives. Resulting in the unusual phenomenon among the Narn, in which the infantry are more idolized than either the fighter pilots or battleship crews, the opposite of what is the norm with other races. That doesn't mean that Narn citizens don't support and admire those in the space fleet, but the ground pounders are closer to their hearts.

Due to their being far more personal energy going into the formation and operation of the ground forces, they usually end up remaining as units and fighting mates for the remainder of their military careers. Though the Narn philosophy of war states that any soldier can be called upon for any type of duty, infantry units which are successful are rarely assigned to other types of service nor are they separated if it can be avoided.

When the Narn need to create a ground military force to accomplish a specific task, the War Leader that is assigned to the task is given a list of groups that are available. From which he assembles battalions, unless a division has already been created. Most Narn commanders prefer to use the battalions, companies, or platoons which are already in a contested area or near the site of the conflict. If the new battalion is constructed by a Narn commander, it's usually because another force was severely damaged in battle. Narn ground forces are equipped with vehicles armed with gauss cannons, pulse guns, missile launchers, auto-mortars, and proximity mine launchers.

The Narn Regime has 3 standing armies, though additional armies may be formed as needed. The three standing armies can be deployed at a moment's notice, if they are needed on a distant world.

Ships and Weapon Platforms of the Space Fleet[]

Vehicles and Aircraft of the Ground Forces[] 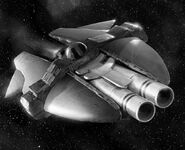