Ragesh III was a Centauri agricultural colony in Sector 156. A civilian operation, it had a population of 5,000 colonists. Among them was Ambassador Londo Mollari's nephew Carn Mollari, who served as the Head Researcher and Project Director.

It was the site of a territorial dispute between the Narn and the Centauri. Before the 100 year Centauri occupation of Narn, Ragesh III had been a Narn colony. The Narn believed that with the end of the occupation, it should return to Narn control. To that end, in 2258, the Narn launched a sneak attack on the colony, which was poorly defended with mines. The Narns forces consisted of older heavy cruisers and Frazi heavy fighters. Ambassador G'Kar of the Narn Regime denied any knowledge of this, but the Centauri government had received a video transmission of the beginning of the attack just prior to losing contact with the colony. This video clearly showed the attacking vessels to be of Narn design.

The Centauri government decided not to respond to the attack. They felt that the colony was too unimportant to risk a major confrontation over. They also pointed out that it was so far that by the time Centauri warships could arrive, "everyone would be dead". This decision was passed along to Londo Mollari, who decided to keep it secret in the hopes that he could still get other races to intervene on their behalf.

An emergency meeting of the Babylon 5 Advisory Council and the League of Non-Aligned Worlds was convened over the crisis. There, G'Kar presented the case that it should return to Narn control despite the fact that the Centauri colony had been there for more than a century. G'Kar made the claim that their forces had come for a peaceful liberation, and that the Centauri had fired the first shot. He presented evidence with a broadcast of Carn Mollari, directly from Ragesh III.

In the broadcast, Carn Mollari claimed that there had been 6 months of violence and division among the colonists. He also claimed that they had requested aid from Centauri Prime, and had received no reply. In response, he stated that the Ragesh 3 Administrative Council had asked for assistance from the Narn Regime, and that they had decided to ally with the Narn "of their own free will." That statement had been forced from Carn Mollari against his will.

G'Kar then confronted Londo Mollari with the fact that the Centauri government had decided to take no action over the attack on the colony. Presented with this evidence, the Council voted against any sanctions or intervention on behalf of the colony. The Narn victory was short lived as Ambassador G'Kar ordered the occupying forces to withdraw after Commander Sinclair threatened to reveal evidence to the council that proves that the attack on the colony was unprovoked and that the supposed invitation was made at gunpoint.[1]

However, while the Narn forces were occupying the colony some important scientific material was "lost"; the Narn Regime later offered to "find" it again for the right price, though they did insist on hard currency in the form of Centauri Ducats.[2] By April, the Ragesh III controversy had reportedly been completely settled.[3]

The Centauri station in orbit 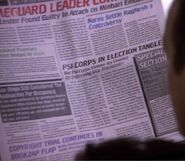