The Babylon Project
Register
Don't have an account?
Sign In
Advertisement
in: Real people, Performers, Guest Stars, Beyond The Rim

Robin Sachs (b. 5 February 1951, London, England, UK, d. February 5, 2013) was an English actor. He appeared as various characters on Babylon 5 and the TV movie In the Beginning.

Sachs died of a heart attack, his body being discovered on what would have been his 62nd birthday.[1] [2] 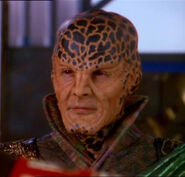