The Babylon Project
Register
Don't have an account?
Sign In
Advertisement
in: Races, Shadow servants and agents, Non-Canon Articles
English

Streib Homeworld
The Streibs are a race of aliens who abduct people of different species and perform experiments on them.

The Streib are servitors of the Shadows, working as technicians and scouts for the Darkness. The Streibs move across the galaxy in their collector ships, looking for test subjects. They take their captives into hyperspace where they conduct their dark experiements on them at their leisure. 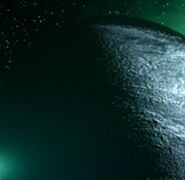