What better way to go out than furthering the course of scientific knowledge?Dr. Tasaki

Dr. Tasaki was a geologist from Proxima III. He was married to a woman there.

Dr. Tasaki was working on Babylon 5 in 2258 when the station began detecting strange seismic disturbances from Epsilon III. Tasaki piloted a shuttle with a team of three other scientists to take readings from low orbit. They had barely made it into their orbit when an extremely strong alien signal was broadcast from the planet, knocking half the shuttle's systems off line and requiring it to be towed back. 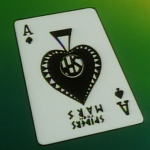