". . . In the midst of all of this, we made contact with Thirdspace . . . and we almost didn't survive it. I only hope we never come across it again, because next time, no one's going to survive it."

Thirdspace was the term coined by Dr. Elizabeth Trent for an alternate dimension, akin to Hyperspace. Entry into this dimension required the use of specifically created gateways to open a vortex into this realm.[1]

Around one million years prior to the Third Age, the Vorlons poured all their knowledge into the construction of a new jumpgate technology that would allow them to escape this universe in favor of Thirdspace, a place they believed to be the "Well of Souls" from which they themselves originated. Although they succeed in opening a jump point, the Vorlons soon discovered that they weren't the only ones trying to escape the universe that gave them birth.

On the other side was a race which can only be described as "Anti-Life" itself. Far older and more advanced than even the Vorlons, all of them telepathic and possessed of the belief that they alone have the right to exist. In the Thirdspace universe they had destroyed countless other races and with the opening of the Vorlon gate, they became aware of "Normal Space". Quickly realising the depth of their folly the Vorlons manage to shut down the gate, but not before some of their own people (who had fallen under the telepathic control of the "Anti-life aliens") took the gate into hyperspace and set it adrift.

The gate went undiscovered for almost a million years until it was happened across by chance in June 2261 while it was drifting through the beacon from the Epsilon III Jumpgate. The artifact was captured and towed into Babylon 5 space where it was studied by a team from IPX. Thanks to a race memory implanted in Lyta Alexander by the Vorlons, the gate's true nature was eventually discovered and a pitched battle ensued. Legions of individuals still under the control of those on the Anti-life side fought the attempt to destroy the gate.

The Thirdspace Dimension is one of darkness and turmoil, one in which the inhabitants of the universe either serve the Harbingers or are consumed by them, sometimes both. The Harbingers have turned that universe into their hunting ground, with all other life in an eternal state of running and hiding. Over the course of several million years, thousands of sentient species and countless lesser ones have fallen to their hunger, either lured into the Harbinger cults or consumed by them. They've scourged numerous worlds, leaving dead worlds tumbling across the void.

The Harbingers for the chance to spread into new universes via those foolish enough to discover the Harbingers, and then absorbing the universe into their ever expanding realm of destruction. The Harbingers are incapable of bridging dimensional gaps without an existing portal (e.g. the Thirdspace Gate) or one of their Throne-class Gateships. Every conquered universe is linked together, creating a growing domain of pain and suffering.

One of the Thirdspace Aliens' dark cities 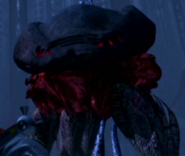