I've uploaded 137 images so far, but these are a few of the most notable. Guerra=Morden!??! 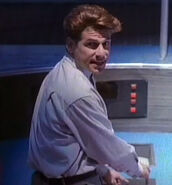