The Valen'Tha was a Minbari Sharlin class warcruiser used exclusively by the Grey Council as their mobile base of operation. [1][2][3]

In 2245 while en route to Z'ha'dum it encountered an Earth Alliance convoy lead by the EAS Prometheus and was severely damaged when the Earthforce ships opened fire.

In 2248, prior to the Battle of the Line, the Valen'Tha participated in an attack on an Earth base which included a station, numerous starfuries, and at least two Hyperion class heavy cruisers, which were all destroyed. The Valen'Tha was damaged during the battle and members of the Grey Council were killed. This incident helped Delenn realized that she was wrong in her decision earlier about retaliating against Earth.[4]

During the Battle of the Line, the Valen'Tha was one of the lead cruisers of the Minbari's final assault on Earth and, on orders from the Grey Council, captured Commander Jeffrey Sinclair's Starfury. It is because of this that it was discovered that Minbari souls are being born into Humans, which in turn led to the Minbari surrender. [5][6][7][8][9][10][11][12][13][14][15] 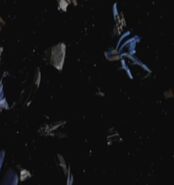