White Star has other uses. Please see White Star (disambiguation) for other meanings.

This ship was the first White Star-class vessel in the fleet. The White Star is known for performing the first known atmospheric jump into hyperspace and successfully opening a jump point inside a jumpgate. White Star 1 was also the vessel used by Captain John Sheridan to successfully prove that telepaths could be used as a weapon against the Shadows. It was destroyed in the Earth year 2260, when John Sheridan used the ship in a nuclear attack on Z'ha'dum.

Back to the Future[]

The White Star went to Sector 14 on a secret mission laid out by Valen. Sheridan, Ivanova, Delenn, Ambassador Jeffrey Sinclair, and Marcus Cole boarded the vessel as a part of the mission requirements. While en route to the sector, the White Star picked up Zathras. The White Star went through the tachyon field to go back to the year, 2254, to save Babylon 4 from destruction and to send the station back to the First Shadow War.

Upon entering the past, the White Star intercepted Shadow Fighters towing a fusion bomb to Babylon 4, and destroyed the bomb with the fighters. The White Star was damaged when the ship could not leave the bomb's blast radius and Sheridan was sent in time to the future, when his time anchor was destroyed. The White Star docked with the station so that Ivanova, Delenn, Sinclair, and Cole can prep the station for the passage back in time. [10]

The crew attached a time device to the station's fusion reactor, but the device went on prematurely, and jumped everything and everyone to the year, 2258. The White Star went back through the tachyon field and returned to 2260. [11]

The crew of the White Star was shuttled over to the station to be registered in the security net at the behest of Captain Sheridan. This was actually a ploy so he can take the White Star to Z'ha'dum with his wife, Anna Sheridan. Sheridan took some nuclear weapons and placed them on board the ship. While on Z'ha'dum, Sheridan remotely activated the ship and crashed it into the main city on the planet which detonated the weapons on board, destroying the White Star with the city and killing Anna Sheridan and Justin. Morden was disfigured and John Sheridan jumped down a hole. [15] [16]

In 2261, Vir Cotto relayed the events of what happened on Z'ha'dum to Ivanova on Babylon 5, which was given to Cotto by Shadow agents to hold for Ambassador Londo Mollari. [17]

The docking bay of the White Star

The bridge of the White Star

The White Star and a Walker ship

The White Star going back to the year 2254

The White Star arrives at Babylon 4

The White Star damaged by a Shadow scout vessel 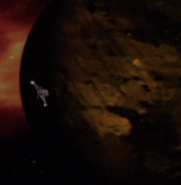 The White Star arrives at Z'ha'dum

The White Star lights up the sky

As the prototype for the rest of the White Star fleet, the ship displayed somewhat variable abilities from appearance to appearance. The bridge in particular underwent numerous major and minor redesigns, including but not limited to changing consoles, chairs, and station locations, before settling into the final design used for the whitestar fleet.